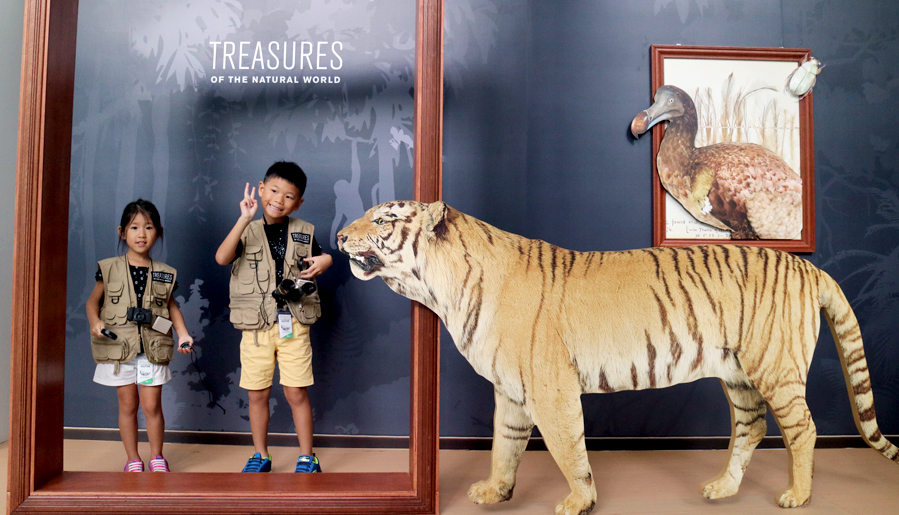 I’ve been taking the year-end school holidays a little easy, going at a much slower pace than previous school holidays. Instead of planning in advance what we’re going to do every single day, I plan for only one day per week. For the rest of the week, we take it as it comes.

In the second week of the school holidays, together with my mom, we dropped by ArtScience Museum to visit their latest exhibition – Treasures of the Natural World.

One of the first displays that caught our attention was this giraffe. We were told before we entered the exhibit that everything we see in the museum is real, but we couldn’t bring ourselves to believe that everything on display is truly real. Between my mom and myself, we weren’t sure if this giraffe is real.

A group of youths came by and were undecided as well. Only one girl in the group was very certain that the giraffe we saw before us was once alive, while the rest dismissed her claims. I decided to get the truth out once and for all by asking one of the staff standing near the exhibit.

I returned to announce to the group and my mom that the giraffe was once alive, along with all the others on display. Everyone was in shock and my mom said, “I’ll probably avoid this place in the 7th lunar month!” Haha! That said, we can’t deny how magnificent everything looked. And how each of the collectors actually went through so much to preserve the natural world as they know it back then.

Besides displays of animals, there were several interaction points to keep the young and old entertain as well.

Interactive screens can be found throughout the museum

Besides running towards the interaction screen found at several points throughout the museum, the children were fascinated with this particular section as they were able to see and touch everything on display freely. The latter was probably the scariest as we didn’t know what was at the other side.

Shrieks of scream followed by laughter could be heard from this part of the museum every now and then as visitors attempt to put their hands into the mysterious hole. Haha!

While Blake walked freely and read the description from the various exhibits that attracted him, Nakayla held onto the booklet given to her about the exhibition and searched for all the pictures listed in the book. It’s some kind of treasure hunt for her!

Mid-way through the museum, there’s a little nook set aside for everyone to make their own box animals with the cut-outs and instructions provided. It’s easy to fold but difficult to keep the whole thing together.

I have no idea how those on display managed to maintain it’s shape so beautifully, but the children and everyone else who were there before us had trouble maintaining the shape of the animals and most of them gave up and left after 2-3 tries. It’s quite a pity actually, cos it makes a nice little souvenir the children can bring home with them. We did bring 2 unfolded pieces home though, and we taped it down to keep everything in place. Haha!

There were also video screenings in various spots of the exhibition, which was gladly welcome by the children. It’s a welcome relief for me too, as these spots tend to have seats for us to sit and enjoy the clip. Haha!

One of the last parts we visited before exiting the museum is also the part we stayed the longest.

Initially, the children just thought it was a screen where they can pretend to do experiments, but after I read what it was about, I explained it to them and that’s when Blake noticed the question on the very top of the screen. (Problems you might experience when the screen is too big and in your face!)

After the children had their fill, we exited and made our way to the photobooth!

Blake wasn’t too keen on taking photos at first, but when he saw that they could dress up as rangers with various props to hold, he was more than happy to be a part of it!

And that, marks the end of our day trip to Treasures of the Natural World.

Treasures of the Natural World will be on from now till 29 April 2018. For more information or to purchase tickets, please visit their website.

Disclaimer: We were invited to Treasures of the Natural World exhibition for the purpose of this review.