Dad, Where Are We Going? 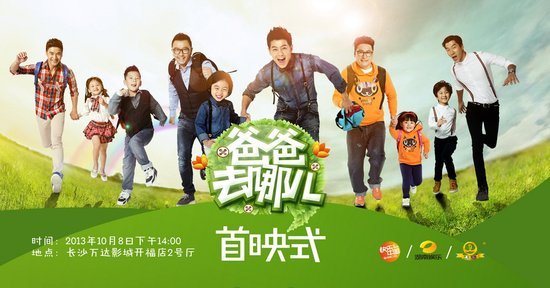 I’ve been watching way too much variety shows on YouTube recently. And the shocking thing is, they’re mostly in Chinese.

My latest obsession, after catching up to the latest episode of Happy Camp, is a reality TV Show from 2013 called, “Dad, Where Are We Going?” a.k.a. 爸爸去哪儿？

And from the very first episode, I’m shocked by the adaptability of the little children.

Sure, they all had trouble saying goodbye to their toys and gadgets initially – who wouldn’t? I would be absolutely devastated! – but I highly doubt that was the toughest part of their father-child journey. A good majority of the time, they had to live without what I would consider basic necessities like clean running water, bathrooms and proper beds.

I cringed at some of the houses they had to stay in, often wondering how they managed to clean themselves up after a day of physical work.

I stare in disbelief, the state of some of the kitchens and manner of handling food, leaving me surprised that none of them suffered from food poisoning.

I was tickled by the fathers who had trouble tying their daughters’ hair, and their cries of woe whenever it’s announced that they have to cook. Their united cheers of relief whenever they didn’t have to were equally hilarious. It never gets old!

Gradually though, as with everything else, the more they experience all these once unfamiliar things, the more open and brave they become, no matter how desolate the situation might be.

After completing the first season (they’re into their fourth season now, with different father-child pairing), I came to admire the children’s resilience and how simple and innocent their world is. To them, as long as they are with their father or doing something for their father, no matter how scary the situation might be to them, they will go forth to complete their mission – complete with tears and cries for help.

One girl in particular stood out. Her name is Angela and she’s the youngest in the group. She stood out mainly because of what her father said at the end of the season, which made me recall back some of the sweetest things she had done. You would really have to watch the whole season to feel the love she has for her father.

But in short, no matter what the father cooked or whatever the result of all the games they have, she was always right there supporting her father and you can see how proud she is of her father in her eyes.

Loosely translated: I want to eat Daddy’s dish!
image source
She actually cried when her father told her not to eat whatever he cooked because he wasn’t sure if it was edible!

Despite the laughs I got out from the dads, I picked up a couple of learning points from them too. One lesson in particular is on the topic of discipline.

There are many ways to discipline our children, and we need to find the method that suits their character and personality. Sounds pretty obvious, but how many of us actually managed to achieve this?

I definitely have not.

In one of the episodes, where they had a parent-child swop, one of the fathers learnt that his methods are completely useless on another child, while another reflected on his; how is it that he could be so patient with someone else’s child, but not his own? Shouldn’t he give his child the same amount of patience and love, maybe even more?

I nodded in agreement with him, but at the same time, I was thinking to myself, “That’s just because we have different expectations for our own children.” Which led me to reflect further… Shouldn’t my children deserve more love and patience from me then?

As another father puts it to conclude the end of the series, loosely translated,

‘How to be a good father’
will be my life’s most important lesson.”