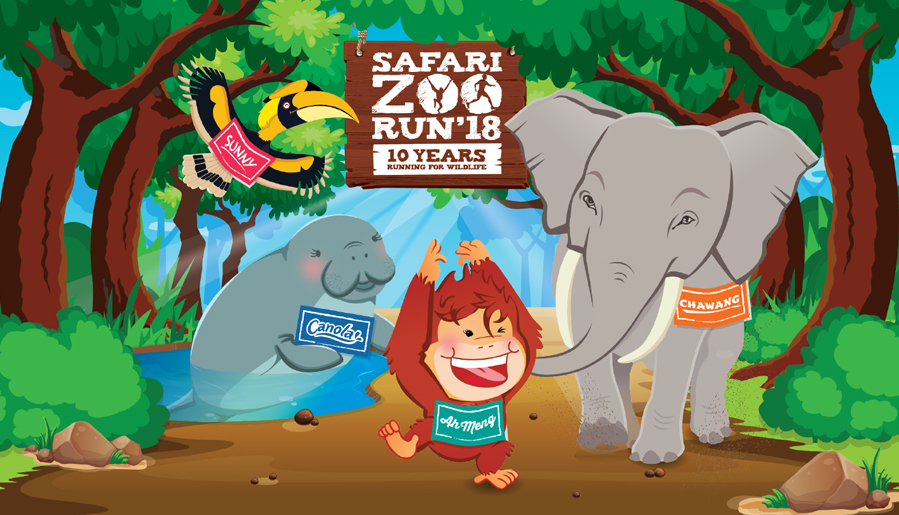 Safari Zoo Run was conceived to commemorate Singapore Zoo’s famous matriarch and one of Singapore’s most loved animal personalities — Ah Meng the Sumatran orangutan, who died of old age in February 2008. Besides encouraging family bonding, the run aims to raise awareness on wildlife conservation as well. What an amazing way to keep fit as a family and help save the wildlife at the same time!

The best part is, the 2018 edition will be exceptional as Safari Zoo Run will be celebrating their 10th anniversary!

The 4 animal icons for Safari Zoo Run 2018 will also be featured in the upcoming run. They are Ah Meng the Orangutan, Chawang the Asian Elephant, Canola the Manatee and Sunny the Hornbill. Each animal icon team supports an endangered wildlife species that Wildlife Reserves Singapore would like to raise awareness for.

Team Chawang supports the conservation of his fellow friend in Night Safari, the Sunda Pangolin!

Found in Singapore, the critically endangered Sunda Pangolin are elusive insect-eating animals that are threatened by illegal wildlife trade. It has been identified that pangolins are the world’s most trafficked mammal. Join Team Chawang to show your support and raise awareness for the conservation of pangolins!

Team Canola supports the conservation of her fellow aquatic friends, the sharks and stingrays!

Globally, a quarter of shark and stingray species are threatened with extinction, with over-fishing being the main threat. Lend a helping hand in raising awareness for the conservation of sharks and stingrays by joining Team Canola!

Team Sunny supports the conservation of his fellow feathered friends, the Songbirds.

Songbird keeping is a popular pastime in many regions in Southeast Asia. It has been recognized that the capture of birds for the songbird trade is the single largest threat for many species in Southeast Asia. Join Team Sunny to show your support and raise awareness for the conservation of songbirds!

Earlier this year, when we participated in our first Safari Zoo Run, each of us lent a hand in supporting every single one of the mascots. And we’ll doing the same again in the next run!

The only difference? Instead of running in the 2.5km category, we’re going all out with the 5.5km Safari Zoo Run (non-competitive race category). And we’ll be able to experience Night Safari in the day! This is going to be super exciting!

So mark your calendars – 27 January 2018, Saturday – for the 10th Anniversary edition of Safari Zoo Run!

Receive 10% discount off any category when you key in the discount code:
SZR18AMAZINGLYSTILL

Register for the run here!

Wish to do more for the conservation of wildlife in Singapore?
Contribute a gift to wildlife and donate to the animals in need here.

Disclaimer: We have been invited to Safari Zoo Run 2018.