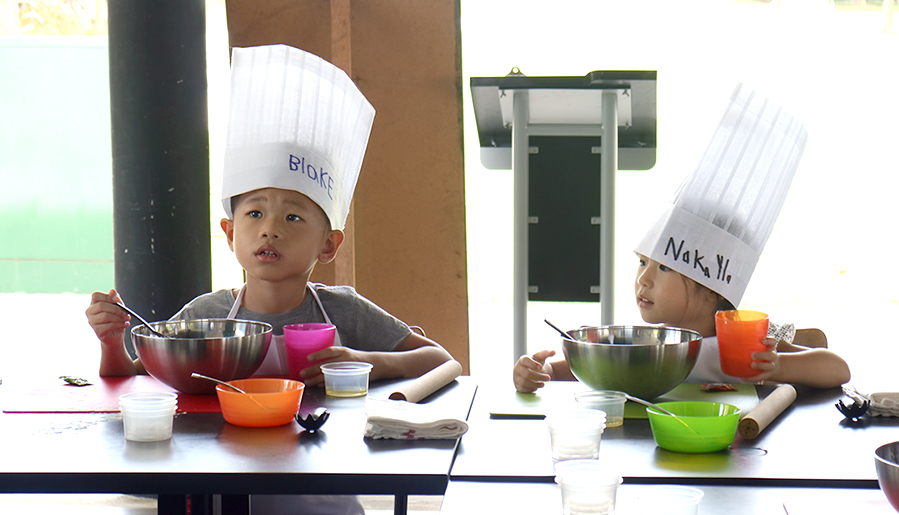 The children had a sneak peek into the life of being a chef when they attended the pizza making workshop at Atmosphere Bistro along East Coast Parkway.

They learnt about the importance of personal hygiene while handling food and were walked through the steps of thorough hand-washing before following the chefs to wash their hands in the kitchen.

When they returned, they were introduced to the different apparatus and ingredients needed to make the pizza. The chef and his assistants went around to ensure that each child knows what’s what before they started.

There was also visual aid from the TV screen to help the children identify the different ingredients.

Shortly after, the children got down to work – making the pizza dough from scratch!

This caught me a little off-guarded as I thought the dough will be pre-made for them in advance, and all the children needed to do was pour the sauce and toppings onto the pizza.

Chef and his assistants were attentive and patient towards the little children, guiding them along the way. The children mixed and dusted and kneaded their dough.

Once their dough was done, they covered it and it was sent to the kitchen so that it will have time to rise. The children kept asking me what it meant, and this was the only thing that came to mind, “Just like little children, the pizza dough needs to sleep so that it can grow!” Haha! They bought it. But it’s true. The fact about sleep and growth. Except the dough doesn’t actually sleep. Haha.

While the dough was asleep, the children washed their hands and returned to find an empty pizza box at their table. It’s time for the children to design and decorate their own pizza boxes! What a fun way to entertain the children and incorporating arts and craft to the workshop!

Unknown to the children, while they were crafting, magic was happening behind the kitchen. Their pizza dough was being swapped! Now now, it’s not that the chef didn’t have faith in the children, but the dough needed time to rise. In order to maintain a good pace throughout the workshop, the chef prepared the pizza dough to be used in the final product in advance. It’s very cooking show-esque!

After they were done designing their pizza boxes, the children went to wash their hands again and found their dough waiting for them!

This was when the fun began.

The children rolled their dough and were guided by the chef and his assistants to form the shapes that make up what they had designed on their pizza boxes earlier! Super creative and cool – I like!

Once the pizza base was done, the children queued up to pick their ingredients before heading back to their tables to put their pizza together.

While the children were busy making their pizza, us parents were enjoying a nice afternoon tea at the sides. Haha! I started with a root beer float and Sean had a pint of beer, followed by New York Impact and Miss Rainbow. Ah, what a peaceful afternoon tea that makes!

It didn’t take long before the children were done with their pizza and one by one, the pizzas were sent to the kitchen once again where it would be baked to perfection.

Whilst the pizzas were baking, the chef and staff brought the children out to have some outdoor fun! Perfect timing, if you ask me. The children were beginning to get a little restless.

After the first few pizza were done baking, everyone cleaned up and returned to their seats to see their own handmade pizza!

Placing the pizza they made into their self-designed boxes marked the end of the workshop, but most of the children couldn’t resist taking a slice or two to taste their own creation while it’s piping hot!

I had a slice too. I just couldn’t resist! And I gotta say, I’m thoroughly impressed! The children were so inspired by their own work that they wanted to do it again for dinner the next day. Pizzas for dinner two days in a row!

Except, the homemade version was a play cheat version. I used bread as base. Haha!

School holidays are fast approaching. What better way to exercise your children’s creativity in an educational and fun learning environment than a pizza making workshop by the coast?

In a 1.5-hour session, children will get the opportunity to make their own pizza from scratch — from kneading the dough, shaping the pizza, choosing their toppings to finally tasting their own masterpieces. All participants will also take home a chef hat as a souvenir from the class.

Sign up via e-mail at enquiry@atmosphere-bistro.com.sg or enquire in-store at Atmosphere Bistro East Coast Park or Alexandra Retail Centre.

Disclaimer: We were invited to participate in the workshop. No further compensation were received.