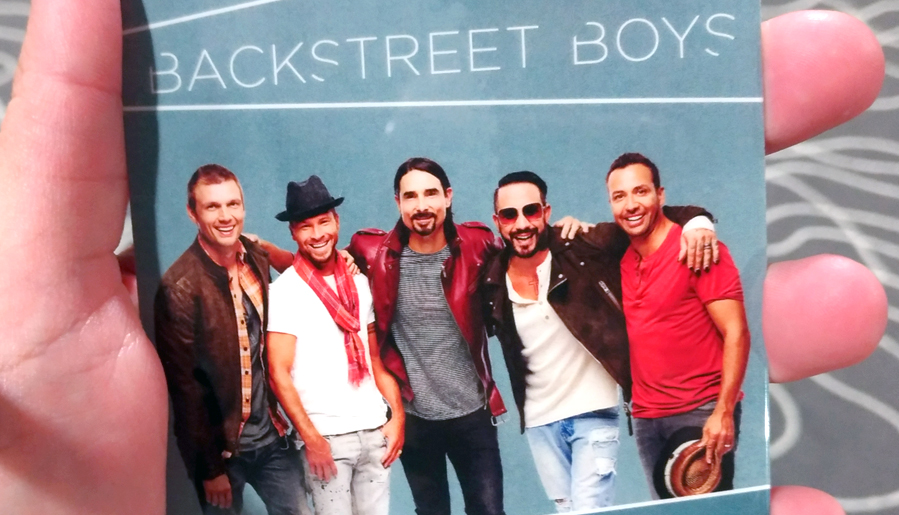 Ever since I was 12, when I first saw Backstreet Boys’ I Want It That Way music video on MTV, I was captivated by them. And the love for them and their music has only gotten stronger over the last 18 years.

This year’s concert marks my third Backstreet Boys concert, by the way. The first in 2010 was already considered an unimaginable feat, and I went all out to party like it was 1999 despite being in my first trimester with Blake.

When they returned again in 2015, I was psyched! I was determined to go, even if it meant having to go alone.

When they promised to return again, with a shorter waiting period, I kept my hopes up and was determined to get as near to the stage as I possibly can.

But never in my wildest dreams will I have thought this night would happen. Not only did I managed to get tickets for the 14th row, but I also managed to snag a VIP meet and greet pass! Like, OMG!

This was a special moment for me, even if it means enduring the heat and standing for an hour and 15 minutes before finally meeting them.

I was 7th in queue. And I was the only one, from the looks of the people around me, that attended the meet and greet alone. Even the security who was in charge of getting us grouped to move to the next holding area for the photo session was shocked, “You alone? Just one?” Haha!

When it was finally my turn, and I made eye contact with Brian, who reached out to shake my hands, I immediately reverted to my teenage self. I became that small, shy girl who couldn’t say anything beyond, “Hi” softly.

AJ shook my hands next and said something but I was still pretty much in shock to register anything. I was basically just staring at him, eyes wide opened, still not believing what’s happening. Thankfully, I managed to keep my jaw up, mouth closed.

When I turned to the next member, I saw opened arms. I looked up and it was Nick! Our eyes met briefly as he said, “Hi”, cos I went back to looking at his opened arms. Then it hit me. He had initiated a hug! OMG. I’ve dreamt of this moment when I was younger, but never have I ever thought this will actually happen! We hugged! Nick Carter hugged me! I relished in that moment, hugged tight, still in absolute disbelief.

Then Kevin leaned down to meet me in the eyes (I’m not that short but he’s pretty tall), probably was the closest face to face I had amongst the five of them, and said “Hi” softly to me and opened his arms for a hug too! Yay!

And last, but not least, Howie. His bright smile, sweet “Hi” and a hug was the best way to end the first meeting of the Backstreet Boys.

Then we took a burst of photos, positioning myself between Kevin and Nick – both of them towering over me. I wondered at some point if I could be seen at all. Haha!

I designed and printed that top myself, just in case you’re wondering

I think reverting to the small, shy teenage girl I was more than a decade ago had all the boys speaking really sweetly and softly to me. I felt so cuddled by their voices! They first captivated me 18 years ago, and they still do 18 years later.

The last thing they said to me before I left was to thank me for coming and to enjoy the show.

A more cheery side of me shone through at this last moment as I exclaimed, “I will!” I took one last glance at them and waved goodbye.

I wish I could turn back time and ask AJ and Brian for a hug too… I guess I’ll just have to wait for them to be back again!