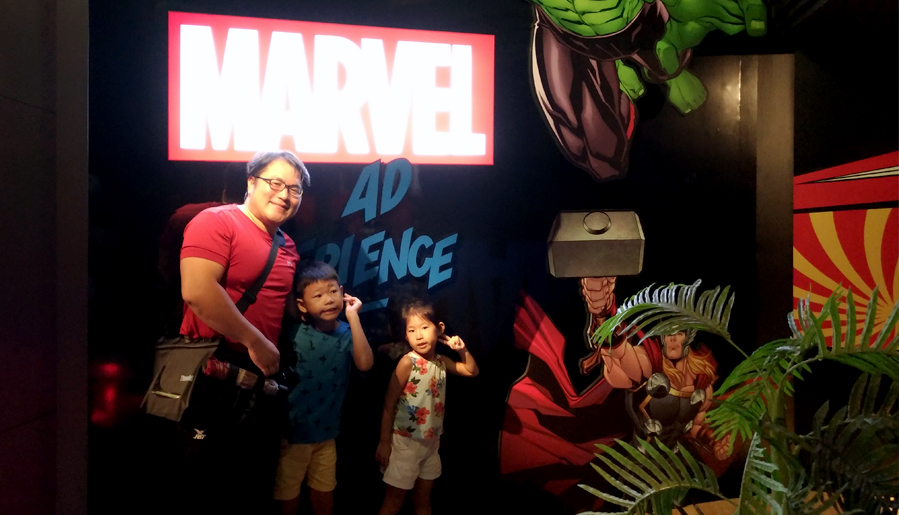 It’s been about two years since our last visit to Madame Tussauds, and the last time we were there, Nakayla was still too young to visit Images of Singapore Live (recommended age is 5 years and above).

Fast forward to the present, Nakayla is old enough and we’re finally able to visit Images of Singapore Live together as a family! As no photo-taking is allowed, this is the only shot we have as a family.

While waiting for the show to start

The experience was probably the most memorable for Blake as he was the sole visitor who volunteered to work with the Samsui women and coolies in our group, and he was tasked to do some work! Haha!

After going back in time and travelling to the future in a span of 30-minutes, we followed the path to The Spirit of Singapore Boat Ride before entering Madame Tussauds.

From our last visit to current day, Madame Tussauds has changed quite a bit but there are still a lot of familiar figures. It’s just that they’ve been moved around to different locations.

Which reminds me, the hubs and I were supposed to take a similar photo on our way down – the children even agreed to help us take the photo! I spotted a similar set up out in the open when we were making our way up to the museum, but sadly, it was raining heavily by the time we left so we had to give it a miss ☹

What was once Katy Perry’s dressing room, is now dominated by Taylor Swift (oops, am I reigniting another round of feud?). But instead of taking photos of the wax figures or with them, this happened…

I was surprised to find this still here though. From what I remembered, they were supposed to be here for a limited time only.

Oh, and I discovered something new about the husband and me. He knows pretty much about the latest songs (or whatever’s played on the radio at least) but he has no idea how the newer pop idols look like. I, on the other hand, have no idea what songs they sing, but I know who they are. This is probably the result of radio versus gossip columns. Haha!

What was once a stage for a band has been replaced by a grand piano. Naturally, the children got drawn to it! Whilst the children were busy taking turns to play the piano, I made my way to Elvis to grab a shot.

Thank you… Thank you very much!

Walking further into the museum, the children discovered an interactive dance area! An apt installation that’s part of the IIFA Awards Experience. It’s all about Bollywood!

After touring the wax museum, came the highlight of our trip – Marvel 4D Experience!

Prior to our show, we entered the waiting area where we got to take photos with the three members of Marvel Avengers!

The 4D experience was a first for the children but Nakayla was too short to get the full experience – She only experienced water spraying onto her. Haha! She got pretty scared at one point too and kept her head down low for the rest of the show. To be fair, it’s a really exciting short film, and because it’s 4D, everything was so in-your-face that I flinched from time to time too! The only thing that will make this experience even more awesome is to move the seats as though we’re on a ride.

After we completed our visit, we made our way out and were shown photos that were taken when we first entered Madame Tussauds. Honestly, I wasn’t prepared for the photo (neither did the staff wait for us to be ready) cos I had no intentions to buy, but when I was told that it was only $10* per photo and $5 for the next, I was hooked!

Unfortunately, we were all looking quite horrible in the three shots taken, so I declined. Then one of their staff (an elderly gentleman) told me that I can always make my way back to the entrance to take more photos. And we did just that! Haha!

And now, I have one proper and memorable photo from visit to Madam Tussauds!

Purchase via KLOOK and save!

Disclaimer: We received an invitation to Madame Tussuads Singapore for the purpose of this review.
*It’s usually $25 per photo at tourist attractions (from my own knowledge), and I honestly have no idea how long this promotion will last.

Entertainment Review Sentosa Things to do in Singapore